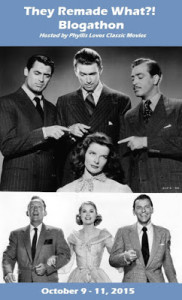 I suspect I’m one of the only people who saw 2002’s The Truth About Charlie, the remake of Charade, before seeing the original 1963 movie. And I didn’t like it initially, perhaps comparing it in my head to what the old-movie buffs I knew insisted was perfection.

When I finally saw Charade, then, it was with a sense of wonder and relief: the movie, though fantastic, is not a classic in that parlor-furniture, mustn’t-be-touched sense that my friends and family insisted it was. In fact, my appreciation for both versions has only grown over time.

The storyline for the movies is more or less the same: After some time away to think it over, pretty Regina (Audrey Hepburn/Thandie Newton) is just about to divorce her husband Charles when he turns up dead. And not only dead, but crooked—Charles was carrying multiple passports under various aliases, and the life Regina thought she had is revealed to be a lie. An attractive man she met on her vacation (Cary Grant/Mark Wahlberg) seems to have followed her home, but why? And what’s his relationship to the sinister trio who begin to stalk her, looking for a fortune Charles stole long ago?

Things only get more complicated when she’s asked by a sneaky American to spy on the whole cat-and-mouse game.

That makes it sound grim, but the original movie is anything but; it’s suspenseful yet witty and fast-paced, with a solid romantic subplot and interesting relationships, all set against the gorgeous backdrop of Paris. The opening has dialogue worthy of The Thin Man, in my opinion:

So how do Charade and The Truth About Charlie stack up?

This category does have a clear winner: in The Truth About Charlie, Thandie Newton is suitably spunky as Regina,  and Mark Wahlberg takes on a rough-edged version of the Cary Grant role, with Tim Robbins as the would-be spymaster (a role Walter Matthau played in the 1963 film). They do their best against the unbeatable originals, but it’s a necessarily losing battle.

And while I applaud tTaC director Jonathan Demme for using a more diverse cast for the three thieves, it’s hard to compete with James Coburn and friends from the original film.

Charade’s soundtrack is the work of Henry Mancini, a man famous for the Pink Panther theme but who had a widely varied career, including doing the music for Remington Steele. The man likely never hit a wrong note in his entire life.

I love it! There are also tracks by Asian Dub Foundation, Gotan Project, and Charles Aznavour, among others. The techno vibe isn’t everyone’s cup of tea, but to me? It sounds like intrigue.

Advantage: The Truth About Charlie

I doubt real Paris was ever the lily-white location of the first Charade film, where the most “foreign” thing the viewer sees is the German tourist Regina uses for cover while surveilling her new friend. The Paris of The Truth About Charlie is more varied: there’s even—gasp!—graffiti. I hate the word “gritty,” but when a movie’s plot features people ruthlessly chasing after stolen war loot, a little grit is probably a good thing.

Advantage: The Truth About Charlie, but only slightly; fantasy-fashion-shoot Paris from the original film is also pretty cool

The Verdict: Mixed. Charade and its remake share the same flaws, really: some parts are more goofy than they need to be, and some of the tonal shifts between terror and whimsy are more jarring than I suspect was intended.  As a caper/spy film, I find The Truth About Charlie, and its version of Paris, slightly more believable. But when it comes to heart…much as I hate dinging The Truth About Charlie for not having Cary Grant and Audrey Hepburn when it couldn’t, the two leads make Charade the timeless film it is. Put bluntly, I’d watch either on TV on a weekend, but only Charade would cause me to say “I love this movie!” aloud as I settled in for the duration.

4 thoughts to “For the “They Remade What?!” Blogathon: Paris and Gamines and Spies, Oh, My! Charade and Its Remake”