(I’d like to say I’m kicking off a spooky theme for October, but this differs from my usual Friday how? Also, I’ve never reviewed anything by someone I follow on Twitter before, so I’m a bit nervous: this plays into my twin fears that 1) people will never read this site and 2) holy crap, people might be reading this site. Anyway…)

Why Finally? After lots of eager reading, a few years ago I found myself no longer enthused about paranormal books—and just when the genre and its assorted subsections really took off, too. Part of this might add up to some hipster suspicion of “things other people like,” but really, why did I stall out on the fifth book of  more than one series?

Eventually I decided it had to be the multiple mythical creatures. I’ve been reading books about only ghosts, only vampires, and the like since childhood and never getting tired of them, but when you have enough monsters running around that you need interspecies politics and logistics, my interest wanes like a werewolf’s light source. That makes sense, right? Question answered!

So along came K.T. Katzmann’s Murder With Monsters and its whole monster manual of characters to prove that, like that guy on Game of Thrones, I know nothing. 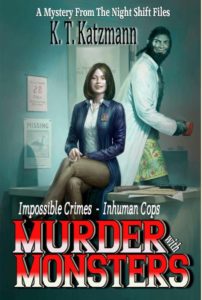 The Premise: Forever sixteen on the outside, vampire police detective Mildred Heavewater works in a very diverse section of the NYPD staffed by humans, Universal Studios refugees, and creatures you will have to look up. A new murder case seems to point to a golem as the culprit, but the Jewish Mildred can’t believe that: after all, they’re “programmed” not to hurt people. Assisted by her human partner and the cute new sasquatch M.E., it’s up to Mildred to investigate in the Orthodox area of Brooklyn while being very, very unkosher.

Know that I am waving my arms and yelling “THIS BOOK IS SO GOOD!”

“J.A.,” you are likely saying, “is this one of your silly things again?” It is! and thank you for noticing. But it’s not just a book that reads like Lovecraft wrote a season of Law & Order and the whole thing was sent up in a Kent Montana novel; there’s a lot of heart here, even if the protagonist’s generally refuses to beat. Watching Mildred navigate her cases, her friendships, and a personal life she doesn’t quite seem to feel the right to have, we get a sense of a complex character for whom too many things have been put on hold, and whose “girl detective” appearance is the final layer of awkwardness on top of her other problems. The supporting characters—which include a werewolf, a harpy, a shoggoth with an excellent phone manner,  and some ghosts— are also (pardon the pun) fleshed out, and I found the whodunit reveal genuinely shocking.

Me being me, the cameos by Isaac Asimov and Carl Kolchak didn’t hurt, either.

The Verdict: *waves arms and yells “THIS BOOK IS SO GOOD!!” again*

I am delighted to see that this is intended as the first of a series; there are so many characters to follow in Murder With Monsters, and I will be delighted to do so. Especially if the shoggoth gets her own story, but I’m weird like that.

Next time: An aeronut. That’s a pun, not a typo.

2 thoughts to “Finally! Friday: Murder With Monsters by K.T. Katzmann”