Honestly, this one’s pretty hard to write up.

Why Finally? “You’ve never seen this movie?!” someone with a wide-ranging Apple movie collection said—and off we went.

People, I had barely heard of Streets of Fire. Movie-wise, I spent 1984 watching The Secret of NIMH repeatedly on cable (while begging to be allowed to watch Flashdance), getting the bejeezus scared out of me at Gremlins, laughing at Ghostbusters and, sadly, not watching The Adventures of Buckaroo Banzai Across the Eighth Dimension.
(In that last case, as the man in a later movie said, I chose… poorly.)

Here is what I knew about Streets of Fire before last weekend:

This video. That’s it.

The Premise: When hometown girl turned rock star Ellen Aim (Diane Lane) is kidnapped from the stage by weird bikers (led by Willem Dafoe as “Raven”), old flame/current mercenary Tom Cody (Michael Paré) is called upon to rescue her. Which he does in spectacular fashion—for the ’80s, that is,  back when less stuff exploded—thanks to the help of a fellow ex-soldier (Amy Madigan in what may be my favorite role in the film).  Also along for the ride is Ellen’s current squeeze, music manager Billy Fish (Rick Moranis).

Streets of Fire calls itself a “rock ‘n’ roll fable,” which is a nice clue that things aren’t always going to make sense. The setting, for example, seems to be simultaneously the 1950s and the 1980s, with spandex pants and punky makeup for performers, but greasers all over the place like it’s set in a Stephen King town. I recall a lot of people in the ’80s complaining that TV and movies were becoming like music videos, and I bet this was held up (down?) as an early example. The story itself is about an inch deep, but evokes so many of the Classic Plots that it has the appeal of a fairy tale.

The Verdict: On one hand, I used the word “delightful” about five times during viewing, and I really enjoyed Streets of Fire. That may be less about the movie itself, though, and more about its resemblance to other works of its time. It has an underdog-mercenary plot like Extreme Prejudice or The A-Team, the random serendipity of the Buckaroo Banzai movie, a neo-retro underbelly like Blue Velvet (and two years before Blue Velvet came out, too), and, heaven help me, the good-will-prevail attitude that is the only thing I like about classic clunker Megaforce.

Even though I found it delightful, I can imagine the film having a lot of haters: the loner-with-a-heart-of-gold hero, for one thing,  is a trope that should be using a rollator to get around by now. Had Streets of Fire been one whit more realistic, I think it would have sunk like a stone.

Might go well with:  I mentioned so many movies above that I’ve got nothing but popcorn for this one.

Next time: In the Quest For Monday, Race tours the facilities.

Why Found-Again? I’m not sure how a Found-Again music post will go; my inability to write technically about music is exceeded only by my inability to write technically about movies. But in the midst of tearing my hair out trying to find a topic for Friday, I realized I’d already revisited something for the first time in a long time this week: Guadalcanal Diary’s 1989 fourth album, Flip-Flop. 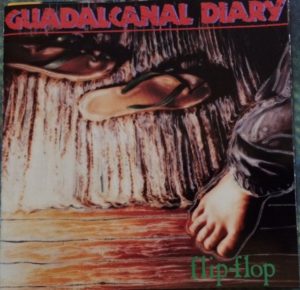 The prosaic answer to the question above is therefore “because I finally ponied up for a CD player for my bedroom.”

The Background: I’ve already done a Musical Interlude post about the southern power-pop trend of the ’80s—popularly typified by REM—which for me managed to combine music I loved with a sense of regional pride. A less sheltered kid would have found out about these bands organically, but my first exposure to Georgia’s Guadalcanal Diary was a review of Flip-Flop in my mom’s copy of People magazine. I tracked down the cassette at a record store in Norfolk after I heard the single “Always Saturday” on the radio, and a decades-long enthusiasm was born.

The single wasn’t entirely typical of the band’s sound, but I fell in love with Flip-Flop…until I got my hands on their first full-length album, Walking in the Shadow of the Big Man. Guadalcanal Diary released four full-length LPs in the 1980s, and my personal ranking of them would involve two ties:

The albums in the number-one spot are a huge part of the soundtrack of my existence from ages sixteen to nineteen. The others…less so.

Because despite bringing the guitar-heavy sound that characterized Guadalcanal Diary…

and making lots of room for the outstanding vocals of singer Murray Attaway, who wails and snarls and purrs like no one else on earth…

…There’s something a little lacking when Flip-Flop is compared to the previous albums. The only word I can think of for it is urgency, and when you consider this was the “final” record for an awfully long time—there has been more music since, and the band members have done other projects—perhaps its slightly elegiac tone makes sense. Compare, for example, to one of my favorites from 2×4:

The Verdict: The same as it was for the movie Oscar, really. Would I change its place in the ranking above after giving Flip-Flop another listen-through? No. Does it deserve more attention than I’ve paid to it over the years? Hell yes.

Might go well with: Pour the summer beverage of your choice and have a listen.

Next time: Set robots to stun.