When I had this post in mind, I thought I had five of those things: the bargain solution for entertainment that keeps my shelves from occasionally running red…er, black with horror DVDs. It turns out I never got around to buying the original  House of Wax on a twofer with the original Night of the Living Dead, because I hate Romero-style zombies and didn’t want it in my house—and if that meant pre-pseudonym Bronson had to stay out too, so be it.

Nonetheless, with Halloween drawing nigh, I’ve been thinking about these four a lot, each in a category all its own.

THE LITERARY: Tales of Terror/Twice-Told Tales 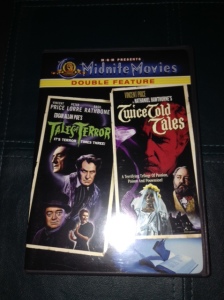 (Pardon my flash on the photo.)

Like most of the twofers, this stars the amazing and wonderful Vincent Price: in this case in two anthology movies, one with Poe stories and one with Hawthorne. The stories themselves are hit or miss (personally, I’d have preferred House of the Seven Gables to be as soapy when I read it in tenth grade as it is in this reincarnated-lovers-heavy adaptation), but with additional talent including Sebastian Cabot, Peter Lorre, Beverly Garland and Basil Rathbone, it’s a lot of fun. 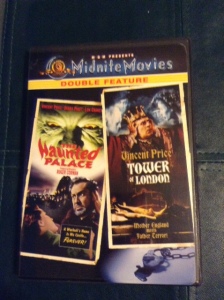 More Price, this time in Corman’s Poe/Lovecraft unholy hybrid, The Haunted Palace, and as Richard III in Tower of London. I’ve owned this DVD for years, but since Haunted Palace is my favorite Vincent Price horror movie, every time I try to watch the other side, I just end up watching Haunted Palace again.

THE UNFORTUNATE: The Oblong Box/Scream and Scream Again 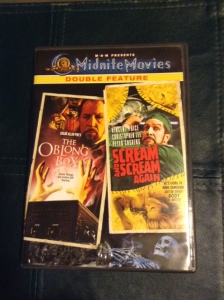 Did you know that Christopher Lee and Vincent Price cancel each other out? I didn’t when I bought this, but it soon became apparent. Possibly nothing could redeem the whacked-out Scream and Scream Again, a movie with serial killers and amputations and mad scientists and fascists in uniforms and lots of Mod clothing. (You will notice I didn’t mention a plot. When you find it, please let me know.) But The Oblong Box is a perfectly nice little voodoo/burial alive movie that should be great with those two stars in it, but isn’t. While I’m not about to throw away a Price/Lee twofer, I’m not about to watch it, either.

THE INEXPLICABLE: The Relic/Pet Sematary 2

It’s no exaggeration to say the only reason I own this is that its existence as a twofer baffles me: Who looks at a monster-in-a-museum movie (incidentally, a Pendergastless adaptation of Preston and Child’s first Agent Pendergast novel) and thinks, “You know what would go great with this? That movie where Edward Furlong is creepier than a devil dog and zombie Clancy Brown combined, even when he’s just standing there.” In fairness, both of these movies were better than I remembered when I rewatched them, but the combination remains bizarre.

One thought to “Twofer The Horrorshow: A Personal Tour”