Synopsis: A strange aircraft that lands near Dr. Quest’s lab isn’t an X-File—just Dr. Zin’s latest scheme. The craft contains a spidery robot that can stun people, spy on them, and (Zin hopes) steal an invention intended to harmlessly disarm people. In my opinion, that’s the kind of thing you want supervillains to have, but hey, it’s not my story.

Tip 34: Sometimes it’s what isn’t said that is most interesting.

Here’s exhibit A. Whether deliberately or for ease of use, evil Dr. Zin has made his robot in the shape of one of the most common objects of phobia: a spider. We know at least one member of Team Quest has a little problem with those, yet no one really mentions it as this big guy scuttles around doing his dirty work. I think that’s a shame.

Speaking of things nobody discusses directly, Hadji continues to have powers beyond the ken of mortal man. 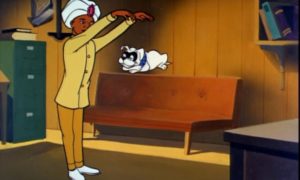 Next time: For the first time in a long time, I genuinely have no idea.