(Episode: “Treasure of the Temple”)

Synopsis: An Australian-sounding adventurer tries to stop Team Quest from exploring an ancient jungle temple the looter has his sights on, even going so far as to subjugate the natives. This show not being called Guy Who Would Almost Certainly Be Played By Tim Roth In The Movie Version, though, he does not prevail.

When confrontation rears its head, cooperation shouldn’t be far behind. 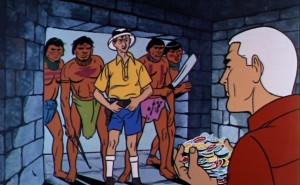 Even so, it’s always going to be a problem when you bring a priceless ceremonial artifact to a gunfight. 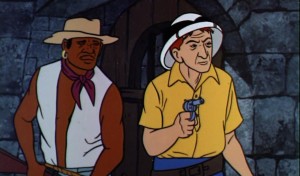 Next time: The Hardy Boys learn about safecracking and how to want a man—as in those pictures in the post office, I mean.

Next time on TQfM!: Boat chase!