(Episode: “Treasure of the Temple”)

Synopsis: An Australian-sounding adventurer tries to stop Team Quest from exploring an ancient jungle temple the looter has his sights on, even going so far as to subjugate the natives. This show not being called Guy Who Would Almost Certainly Be Played By Tim Roth In The Movie Version, though, he does not prevail. And in a sort of side feature, a series of animals attempt to eat Race Bannon.

Team Quest has been rescued from their captors by the non-slow-loud-English-speaking fellow they rescued earlier, but escape lies over treacherous waters. 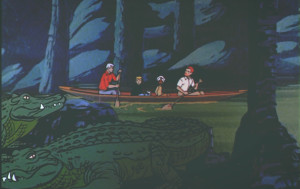 Tip 23: Row, row, row your boat…and for heaven’s sake, try not to get involved in this kind of thing.

Not an inflatable vest in sight. Shameful.

Next time: With any luck, I’ll be returning to the crypt with Scream Blacula Scream.

Next time on TQfM!: Believe it or not, the end of this episode. I blame those…vampire bats.