If you read my Twitter feed, you probably know I lost my oldest cat recently: Jasper was over 17 years old, so in a way it wasn’t a surprise, but I’d somehow got my heart set on 19 to be the age at which I’d be sort of okay if the cat died of old age.

In 1998, my future ex-husband and I heard a sad little noise outside the door of our apartment. I opened it and there he was, a half-grown tabby kitten begging for food. I gave him a little of the kibble we had for our cat, and soon we were on a route the cat took around the building: on the first floor, the people who’d turned him loose in the first place were still occasionally feeding him, and he also had a benefactor on the third floor.

And on every floor he had a name. On the first floor he’d been Princess until certain facts made themselves apparent, then Prince. The third floor called him Toby. To me, he was Jasper. 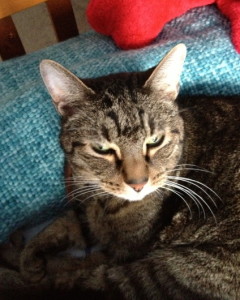 Things continued like that until one day his former owner popped his head out on the balcony below ours. “You gonna take that cat?” he asked.

I said I was, and he handed up the remaining food and litter from Jasper’s brief tenure as an indoor kitten, and I was suddenly the proud owner of Princess Prince Toby Jasper, a cat who loved attention so much he purred if you made extended eye contact. When the FEH and I separated, there was no doubt who was going to take him, and Jasper and I became single at the same time.

He seemed bored, so I got him a friend.

A few weeks ago, it became clear that Jasper was wasting away. At his next-to-last vet appointment, he was diagnosed with kidney failure. (I’d already suspected it, since I’d seen my dad suffer kidney failure too.) As though he’d heard the diagnosis, in the space of a weekend the cat went from “kind of weak” to not being able to stand on his own. He wouldn’t eat or drink. When I carried him to the litter box, he simply fell over and stayed fallen.

As I told them vet who helped put him out of pain, I’d really hoped he’d go on the top of the sofa in his sleep. “It rarely happens that way,” she said.

I never thought I’d be one of those people who had their animal’s ashes in the house, but when it came down to it, I couldn’t put him outside again. So now there’s a little urn that wears his collar, and Jasper is again sitting on the furniture. And I am training myself to say “Let’s go feed the fish!” to the other cat in the morning when I used to say “Let’s go see Mr. J!” and not to turn back to his place on the sofa to say goodnight every night. I never look down to find I’m petting a cat with no recollection of how he got there: Inky’s no lap cat, while Jasper’s spy name was The Insinuator. No one steps on me on the way to find out how much milk is in my coffee. It’s surprisingly awful.

Goodbye, Jasper: you were one of the best.

Next time: Something slightly more cheerful.