(As you may notice, this week’s Friday post is on Saturday because the website went spoink! yesterday. In other news, I now know one elementary way to unspoink a website.)

Why Found-Again? Because for some reason no one’s gotten around to making CSI: Bayport yet.

The Premise: We’re back in sit-Chet-down-and-talk-at-him mode for the beginning of this chapter, “The Clue of the Broken Pencil,” while all three Hardys take the poor lad through the basics of crime scene photography and recording. They start, however, with this howler: 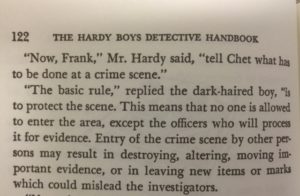 To put this in context, every person involved in the above conversation was standing over a murdered policeman’s body in Chapter 5, and every person involved is still not a law-enforcement officer*. (This is one of the things I miss about having a kid’s perspective on this book: when I first read it, well, of course it was okay for teenagers to be hanging around multiple crime scenes! Kids are smart, right?)

No sooner have the Hardys taught Chet how to graph items on scene sketches—and as ever, my respect for the real-life people who did all this stuff by hand only grows with each chapter—than word comes in of a burglary. A burglary at a factory that makes gold- and silver-rimmed eyeglasses. That’s right, somebody spends time in this story running around with a literal chest full of gold. Arrrrrr.

The chest is recovered in the woods, and one of Chet’s crime-scene sketches eventually reveals the robbery was an inside job. The police catch up with the crooked bookkeeper, and a search reveals the titular broken pencil.

(Those of you still seeking tips for budding villains can now add “Make sure your car isn’t likely to break down” to the list. At least it wasn’t Turkish cigarettes this time.)

When confronted, the bad guy actually says “You’ve got nothing on me, copper,” for which alone he deserves jail time.

The Verdict: I liked the apprehension of the suspect (and the box o’ gold), but all in all, this wasn’t one of the better chapters. It’s a slightly dry subject, there isn’t a lot of integration with previous chapters, and the story leans too hard on Chet making all the good discoveries in the first half. When we find out the villain said the police were hicks, we shouldn’t have sympathy for his opinion—but they were just schooled by a teenaged tyro.

*I can’t say for sure that Fenton’s not some kind of honorary deputy, since this is the only Hardy Boys book I’ve read in 20+ years. He certainly should be if he’s just going to hang around all the time.

Next time: Get a rope.