Back to raiding my DVD collection!

Why Found-Again: Blame Netflix. I started watching Criminal Minds a few weeks ago— what can I say? I guess I’m not depressed enough and/or wish to develop new phobias about driving, going to the park or sleeping in my home. There’s a season 2 episode set in New Orleans, and I found myself comparing the actors’ accents with Dennis Quaid’s often-mocked performance in 1987’s The Big Easy.

The Premise: Remy McSwain (Quaid) is a happy-go-lucky cop and a crook with a heart of gold, so steeped in graft that he barely notices it. An apparent mob murder coincides with the arrival of an investigator from the district attorney (Ellen Barkin), and the case begins to look less like an incipient gang war and more like the police have turned to murder.

Dennis Quaid often seems to be the salvation and the damnation of The Big Easy at the same time. His character is enormously charming, even when doing awful stuff like taking bribes; if you can’t get past the accent he seems to have stolen from this 1986 potato-chip commercial, however, the movie can be rough going. Quaid’s performance also goes a long way toward selling the movie’s other stereotypes—the random references to Mardi Gras, the voodoo, the gator—and he even takes a turn singing Cajun music at one point.

The resemblance to other ’80s buddy-cop movies is obvious; less obvious is The Big Easy’s kinship to the horror-genre staple in which children begin to figure out that all is not right with their families, and here I think the movie shines brighter. Remy’s failure to be suspicious of his fellow officers isn’t because he’s particularly stupid or greedy; it’s because they’ve been literally the background of his existence. There is a level at which this is a fairy tale, with guns and heroin and crime lords as the monsters in the wood.

The Verdict: The Big Easy’s faults are real. There was a (perfectly understandable, says this étouffée and zydeco enthusiast) fad for all things Cajun in the ’80s, and this movie is one of the results. That said, the film has a splash of noir and a lot of heart that make it more watchable, and the cast (Quaid and Barkin are joined by John Goodman, Grace Zabriskie, and Ned Beatty, among others) does a lot to elevate the goofy parts. And though I didn’t mention it above, let’s face it; the movie has some of the most effective sex scenes ever. 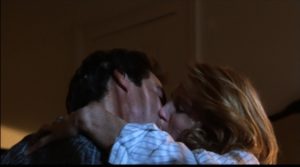 Might go well with: You name the Cajun food, it’ll go well.