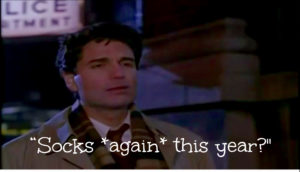 Why Found-Again? It’s only been a year or so since I watched this one, so it really never left. One thing about the fictional character Charles Dexter Ward: he gets portrayed by some very good-looking guys.

The Premise:  Wealthy, slightly dorky chemist Charles Dexter Ward (Sarandon) gets progressively weirder about his secret experiments, eventually leaving his wife Claire (Jane Sibbett) in the middle of a party. With the help of a mysterious associate, Charles takes his studies to a rural cottage, but things take a dark turn after a neighbor complains and human remains are discovered. More confused than ever, Claire hires private investigator John March, who soon realizes Charles has been replaced by his wizard ancestor and that people and things are being—surprise!—resurrected.

They’re pretty bloody and sticky about it, too.

The cast is very good: I’m both old enough and weird enough to geek out seeing Jane Sibbett in this movie because I loved her in an old Fox Network show called Herman’s Head, of which I may have been the only loyal viewer. 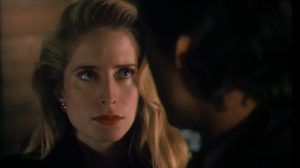 She more than holds her own in a role original to the movie, as does John Terry as the PI who would really like not to believe in necromancy. But of course, it’s Sarandon who steals the show in his dual role as Ward and his revivified ancestor Joseph Curwen. (Curwen subsists on red meat and scenery, and I’m not complaining at all.)

The Verdict: The Resurrected is a modernized, noir-ified version of the classic Lovecraft story, but the bones of the plot are largely the same: man dabbles in genealogy, discovers lookalike ancestor, dabbles in the occult, recovers lookalike ancestor, and lives to regret it but not much longer. The movie suffers from some of the common complaints of horror films—the effects can be a little goofy, the detective plot sometimes sits awkwardly over the source material, and I personally despise the set design for the PI’s office to an incredible degree—but it does a very good job as an adaptation, especially in the last half.

The mystery is compelling (assuming you haven’t read the story…or indeed this review), the villain is scary, and the creatures are downright chilling. This is probably the goriest thing in my DVD collection, and I regret nothing except the few seconds of eyeball violence.

Might go well with: The Haunted Palace, any of the other movies I’ve covered this month, and any vegetarian recipes you might have lying around.

Next time: We go from doubles to dubloons.